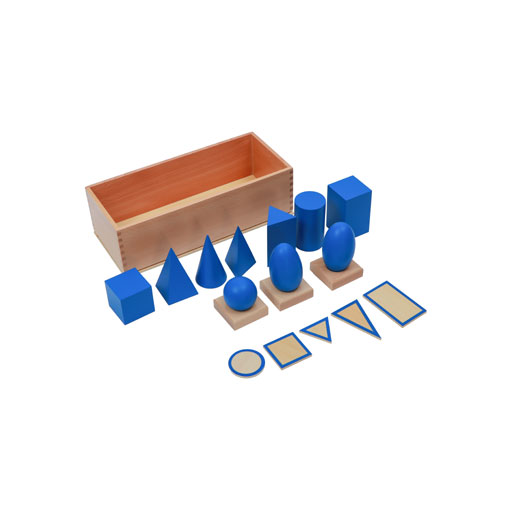 A050
Geometric Solids with Stand, Bases, and Box

Bases for the solids.

The Directress shows the child how to carry the baskets of solids to the table.

Directress sits beside the child, removes all the solids from the basket and places it on the mat. Directress picks up a solid and invites the child to feel it. Then Directress demonstrates: Solids that can roll, can slide, can roll and slide. Invite the child to try rolling or sliding the solids.

Invite the child to divide the solids into sets: those that can roll, can only slide, can roll and slide.

The Directress may then gradually introduce the solids and name them using the Three Period Lesson, starting with two solids at a time.

It is important that the Directress should help to make the child aware of the geometric solids to be found on the everyday environment. This can be done informally or as a class project. The children can be asked to collect and bring to school such items as empty cardboard boxes, tins, etc. that correspond in shape to the solids and these can be displayed in the classroom. Another way of interesting him in the solid geometrical forms is to make them move. The sphere rolls in every direction; the cylinder rolls in one direction; the cone rolls round itself; the prism and the pyramid, however, stand still, but the prism falls over more easily than the pyramid.

Provide experiences of solid shapes in the environment and stimulate interest in discerning these shapes in the world around the child.

Develop an understanding of the relationship between shapes.

Exercise 1: The child is asked to experiment with the solids and place one or two together to try and form other solids. (Take only those solids that can be built on. Remove those that can not stand on its own). This should be followed by a discussion, "Which solid can stand on the other?" e.g. cone on top of a cube, cube on top of a rectangular prism and a square based pyramid,...etc.

Exercise 2; Using the set of bases, the child is asked to place each solid on its base. Using the appropriate language the child is helped to discover which solids have the same bases. The languages used is important so that the child realizes the importance of straight edges and curves. (Note: "Solids have at least one base. Some have more than one base. Some can not stand on its own.")

Exercise 3: The Directress places all the solids in the basket and places the cloth over it. The child is then asked to feel the solids, name them and then take it out to confirm.

Made by beech wood.