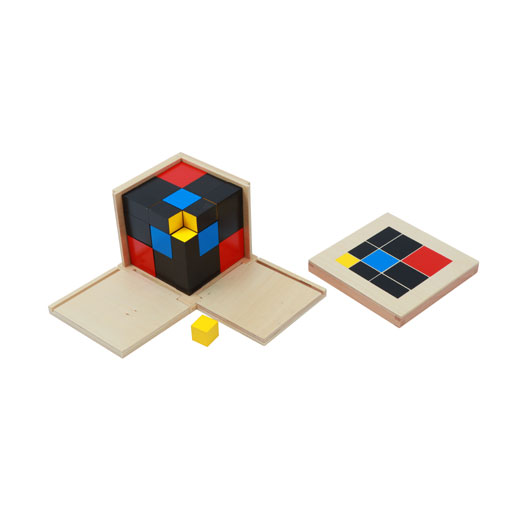 27 painted wooden cubes in a wooden box with a lid. The box is hinged and opens out to display the cubes. The lid is printed with the trinomial square pattern.

The child takes the cube apart beginning with c3 and lays out the pieces as shown, according to the formula.

The child reconstructs the cube, matching red faces, black faces, and blue faces, beginning with a3.

Seeing the pattern on the lid, the top, and the sides of the cube. Seeing the binomial contained within the trinomial cube. Touching the colors which match and joining the prisms on identical sides.

Development of the visual sense of shape.

Development of an appreciation for beauty of form in three dimensions.

Responds to the sensitive need for order in the child.

Preparation of the algebraic concepts involved in the trinomial theorem.

Proceed as in presentaion 1 through step #6. Build the layers outside the box without the lid.

Proceed as in presentation 1 through step #6. Remove the prisms and place them in three horizontal rows from right to left. Then replace the prisms in the box.

Proceed as in presentation 1 through step #6. Remove the prisms and place them in a horizontal row, beginning with the yellow cube and proceeding left to right and back to front, organizing the prisms by shape. Replace the prisms.

Place the emptied box at another table or rug. Rebuild the prism into the box, transfering the prisms one at a time.

Using a blindfold replace the prisms in the box.